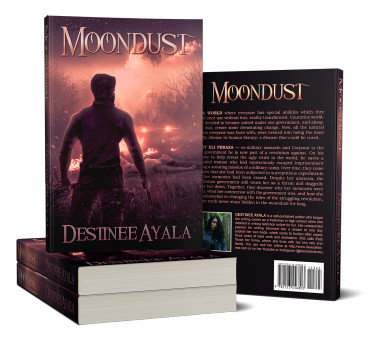 This is my daughter Destinee Ayala's first book. It is available in paperback form here, through Crawler Innovations. If you prefer a digital copy, it is available on Amazon as well.

In a world where everyone has special abilities which they could once use without fear, reality transformed. Countries worldwide decided to become united under one government, and alongside that, create some devastating change. Now, all the natural talents everyone was born with, were twisted into being the most deadly disease in human history; a disease that could be cured.

Meet Eli Peraza — ex-military assassin and Corporal to the very government he is now part of a revolution against. On his journey to help reveal the ugly truth to the world, he saves a wounded woman who had mysteriously escaped imprisonment during a scouting mission of a military camp. Over time, they come to learn that she had been subjected to surreptitious experiments and her memories had been erased. Despite her amnesia, the totalitarian government still views her as a threat and doggedly hunts her down. Together, they discover why her memories were taken, what her connection with the government was, and how she is fundamental to changing the tides of the struggling revolution, for the truth never stays hidden in the moondust for long.

Rated M for some violence and mention of drinking/smoking

This product hasn't received any reviews yet. Be the first to review this product!

All prices are in USD. Copyright 2022 Crawler Innovations. Sitemap |